Samsung A80 vs Galaxy A70: Comparing the Latest Samsung Smartphones 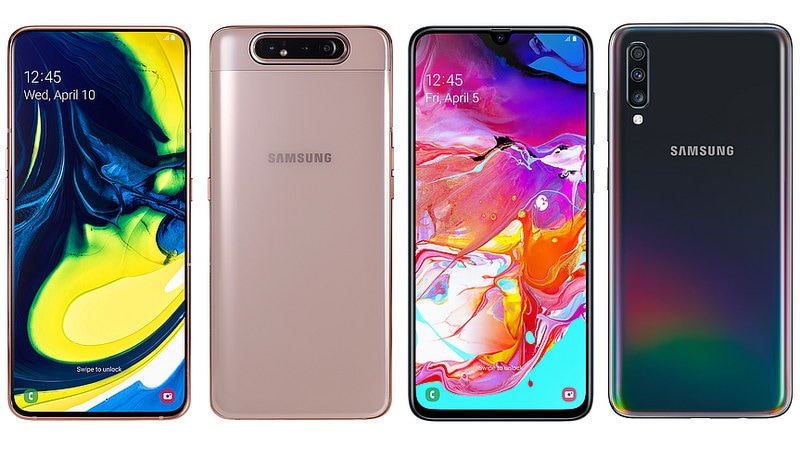 Samsung Galaxy A80 and Galaxy A70 are the South Korean consumer electronics giant’s top-end Galaxy A-Series smartphones, and share a few similarities. Both have in-display fingerprint sensors, both feature Qualcomm’s latest Snapdragon SoCs. There are some significant differences between the Galaxy A80 and Galaxy A70 as well, with only the former featuring the innovating rotating, sliding triple rear camera setup, with the latter sporting a more conventional triple rear camera offering. To recall, the former was unveiled at an event in Thailand earlier this week, while the latter was unveiled late last month. In this article, we examine the differences between the Galaxy A80 and the Galaxy A70, in terms of price, specifications, and features.

Samsung A80 vs Galaxy A70 price

The Samsung Galaxy A80 price has been set at EUR 649 (roughly Rs. 50,500), and it will go on sale from May 29 in markets across Asia, Australia, China, Europe, Hong Kong, the Middle East, New Zealand, and Russia. For now, the Galaxy A80 price in India has yet to be revealed, but we can expect the company to keep it similar to its European price tag. It will be made available in Angel Gold, Ghost White, and Phantom Black colour variants.

On the other hand, the Samsung Galaxy A70 price has been set at CNY 2,999 (roughly Rs. 31,300) for its 6GB/ 128GB variant, going up to CNY 3,299 (roughly Rs. 34,000) for its 8GB/ 128GB storage variant. It will go on sale from April 26 in Black, Blue, and Coral colour variants. Exact regions of availability weren’t detailed, but the smartphone is up for pre-orders in China, and has been listed on the India site. Once again, we can expect the Galaxy A70 price in India to be similar to the China launch prices.

Samsung A80 vs Galaxy A70 specifications

Both the Samsung Galaxy A80 and Galaxy A70 are dual-SIM smartphones. They both run Android 9.0 Pie with the company’s One UI skin atop. Both also bear the same size of Super AMOLED display – 6.7-inch – with the same full-HD+ resolution of 1080×2400 pixels in a 20:9 aspect ratio. However, while the Galaxy A80 has a notchless display thanks to its rotating camera setup that removes the need for a front camera display notch, the Galaxy A70 has an Infinity-U Display display instead, with the U describing the shape of the notch Samsung has used.

As for optics, the Samsung Galaxy A80 bears an innovating rotating slider triple camera setup that slides up and flips around when users tap on the selfie camera mode in their camera app. The setup comprises a 48-megapixel primary sensor with an f/2.0 aperture, a secondary 8-megapixel camera with an ultra wide-angle lens (123-degrees) and an f/2.2 aperture, apart from a 3D depth camera.

Both smartphones have similar connectivity options, though it must be pointed out that the Samsung Galaxy A80 foregoes the 3.5mm headphone jack. The Galaxy A70 has the jack however. Notably, as with all the Galaxy A-series smartphones released in 2019 excluding the entry-level Galaxy A10, both the Galaxy A80 and Galaxy A70 feature USB Type-C ports. This helps the smartphones deliver 25W Super-Fast charging.

The Samsung Galaxy A80 sports a 3,700mAh battery, while the Galaxy A70 sports a significantly larger 4,500mAh battery. The former measures in at 165.2×76.5×9.3mm, while the latter measures in at 164.3×76.7×7.9mm. Samsung has yet to detail the weights of the smartphones, or their sensors. As we mentioned, both smartphones feature in-display fingerprint sensors, but while the Galaxy A70 bears an optical offering, it is currently not known whether the Galaxy A80 has an ultrasonic or optical in-display fingerprint sensor.